Ninja Turtles Painted as their Namesakes

Just some of the best graffiti I've ever seen in Brooklyn. The Original Turtles. #Bushwick #streetart #traintacks #NYC #TMNT #mural

From Keith Haring to Banksy, street artists have been giving the museum and gallery establishment a run for their money for a long time now. And it looks like Owen Dippie, who hails from New Zealand, is about to join the ranks of the graffiti elite.

As a kid, he was a big fan of the Teenage Mutant Ninja Turtles, and in an inspired homage he recently painted a mural along some train tracks in Brooklyn depicting the actual artists Leonardo da Vinci, Raphael, Michelangelo and Donatello each sporting their corresponding Turtle’s mask.

Pictures of Dippie painting the project show him on a long ladder, giving some perspective to just how huge the images are. What I still find hard to believe is that there are people in the world talented enough to create images as realistic as these just using spray paint cans. The kicker is an awesome picture of the artist in front of his finished work sporting both a Ninja Turtle mask and T-shirt. The whole thing is about the best combination of pop culture and high art I have seen in a long time. 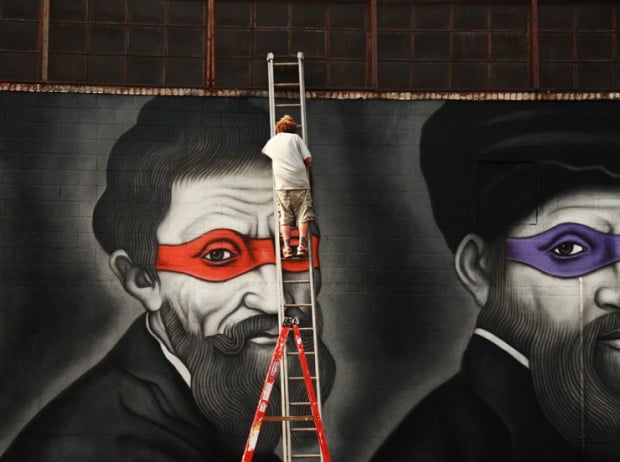 And, just like people did in NYC with some of Banksy’s recent works, you should unfortunately expect someone to somehow try and steal Dippie’s mural, because his work will undoubtedly soon start to skyrocket in price (basically every print and original work on sale on his site is sold out).