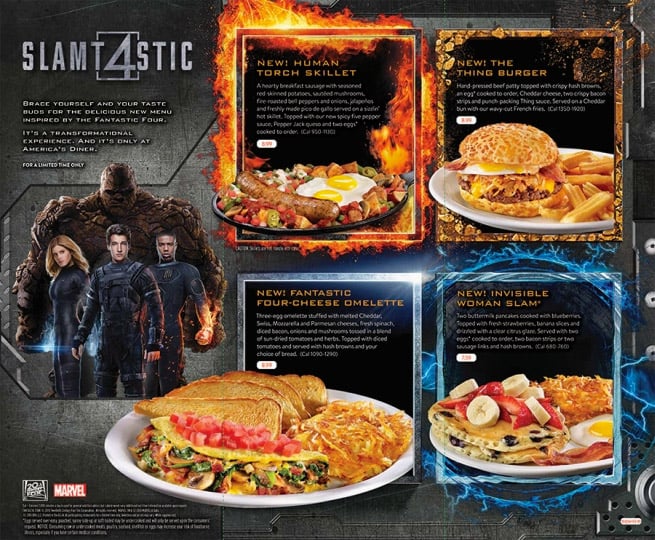 I have had many a Denny’s Grand Slam breakfast in my day, and they have definitely hit the spot. And their new Fantastic 4- inspired menu – dubbed “Slamtastic 4” and available beginning June 23 – may have fans of the film flocking to the classic diner chain to chow down after seeing the movie to discuss their favorite scenes.

The meals include “The Human Torch Skillet,” which turns up the heat with jalapeños and pepper sauce and features a really big phallic looking sausage; “The Thing Burger,” which is topped with hash browns and something called “Thing Sauce”; a “Fantastic Four-Cheese Omelet,” whose cheesy goodness is derived from a mixture of Swiss, mozzarella, cheddar and Parmesan; and “The Invisible Woman Slam,” which sounds like a diet meal but actually features blueberry pancakes, eggs, bacon or sausage, and hash browns. And if you’re still hungry after one of those huge plates of food, you should order my favorite themed item, the “Doctor Doom Lava Cake.”

In addition to the new menu, Denny’s is also offering a sweepstakes that will fly a fan and his friend to the film’s Aug. 4 premiere. The winners will get airfare, tickets to the premiere, a two-night stay in a 4-star hotel, $250 for ground transportation and $1000 in cash, which means you can splurge and have dinner at ritzier place than Denny’s.