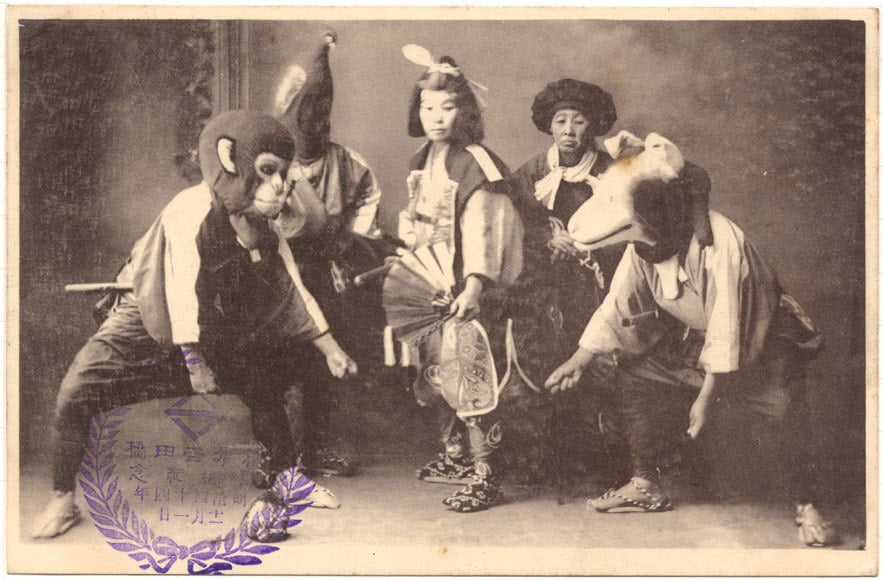 Cosplay is big in Japan. There are even restaurants where both the diners and the servers dress up like their favorite fantasy characters, and photo studios with themed rooms where fans can be photographed in the environment of their choosing. But the recent discovery of a 100-year-old Japanese cosplay picture is proving that the practice goes back a lot longer in Japan than anyone ever imagined.

The story is a bit strange, and it deals with the building of a bridge. Just stay with me now. When the Yoshidahashi Bridge was completed in 1911 in Yokohama, to commemorate the accomplishment a postcard was made. But the postcard didn’t depict the bridge, it showed a bunch of people dressed up in crazy costumes from an old Japanese fable called Peach Boy. Why? It was a 100 years ago! How the hell would I know!

What I do know is that these century-old cosplay fans are just as inventive and offbeat as today’s – maybe more so given what they must have had to do to create their costumes and get the situation photographed. The picture shows two rather bland looking women flanked by a person in a giant monkey head and another wearing a giant dog head who look to be about to start a sumo wrestling match. Behind this bunch stands someone wearing what amounts to a giant bird on his head.

It just goes to show you – even though you think you’ve come up with something completely novel, there’s probably someone out there who had your idea a long time ago.