Batman: The Ride – Just What is a 4D Rollercoaster?

On Memorial Day weekend, the official start of summer, Six Flags in San Antonio is set to open Batman The Ride, which it is describing as “The world’s first 4D free fly coaster.” How exactly do you create a 4-dimensional experience on an amusement park ride? Six Flags explains that, “Magnetic fins cause you to flip as you fly over the top of a 12-story hill and two beyond vertical drops.” Still confused? So was I until I watched the amazing video animation that shows you what the experience is really like. 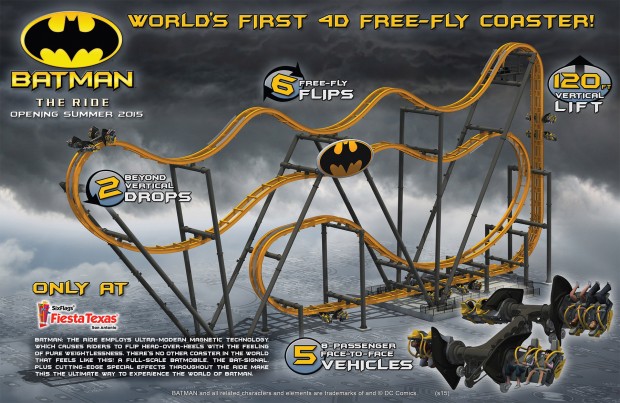 After strapping on a serious shoulder harness (you’ll need it), you shoot straight up, and then as you drop, the seat you are in actually does complete circular flips. So imagine flying along riding in a conventional roller coaster, but every time you take a serious turn or a wicked dip, you also simultaneously do a somersault. It’s like two rides in one, combined together like nothing I have ever seen before – and I have ridden a lot of rollercoasters. Six Flags is not being hyperbolic when it calls this thrill ride unique, and it looks so intense that Batman himself may have second thoughts about going for a spin.