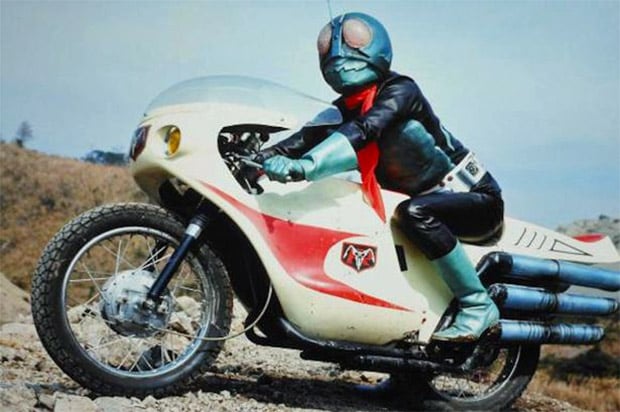 A man wearing a flashy grasshopper costume riding a tricked out motorcycle cruising through the streets of Japan trying to nab people driving under the influence. Sounds like a great concept for a superhero, right?

Well, it actually was. “Kamen Rider” aired on Japanese TV from 1971-73 and featured a very similar looking insect-inspired action hero battling against terrorists. (The character was also featured in a subsequent comic.)

Now Japanese artist Shinjiro Kumagai, who creates his works from tin cans, has adopted the identity, but refocused his efforts from battling terrorists to stopping drunk drivers in their tracks. And if that’s not strange enough, he’s not being shunned by the police, he’s being embraced by them, “wearing an armband identifying him as an official drink-drive patrolman,” according to an article in the Daily Mail.

You can see him in action in the video clip above. The only problem is that he looks a little skittish piloting his big bike. But hey, if he’s already getting people under the influence off the streets, the better he gets on his bike the more tipsy motorists he’ll be able to track down.