Godzilla vs. Shakespeare: The Bard Takes on the Beast 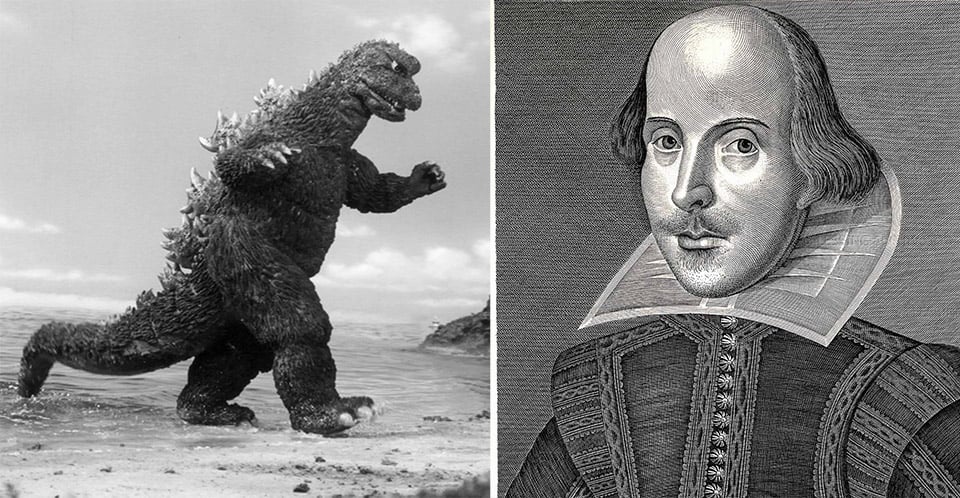 If President Abraham Lincoln can go after vampires, then why can’t the greatest playwright of all time take on the greatest monster in history?

As we learned at Moviepilot.com, that’s just what happened when award-winning sci-fi writer Jo Walton turned her talents to penning Shakespearean-style sonnets about the great Godzilla. Her inspiration was helping to raise funds at this year’s auction at the sci-fi Vericon Convention held at Harvard. According to the article, The Vericon Charity Auction is an event wherein a series of wacky and exciting items are auctioned off to raise money for charity. This year’s auction theme was Godzilla vs. Shakespeare.”

Walton took the theme very literally in her sonnet titled, Godzilla vs. Shakespeare. Our favorite passage? “Godzilla, shuffling closer, knows what’s what. Size Matters. But then do prose and plot.” Bravo.

Up on the ramparts all await their time
Each heroine, the fools and knaves, each king,
Ready to catch our hearts, the play’s the thing
A cockpit where they arm themselves with rhyme.

The monster tries to hide, but shows through plain,
Behind a frond ripped up with giant claws
We see his scaly hide and gaping jaws
As Birnam tropics come to Dunsinane.

All rally to defend now, each with each,
Juliet with dagger, Richard on a horse,
Dear Hamlet with his poisoned foil of course,
Harry with swords and longbows, at the breach.

Godzilla, shuffling closer, knows what’s what.
Size matters. But then so do prose and plot.

Our suggestion for next year’s convention theme – Whitman vs. The Werewolf.