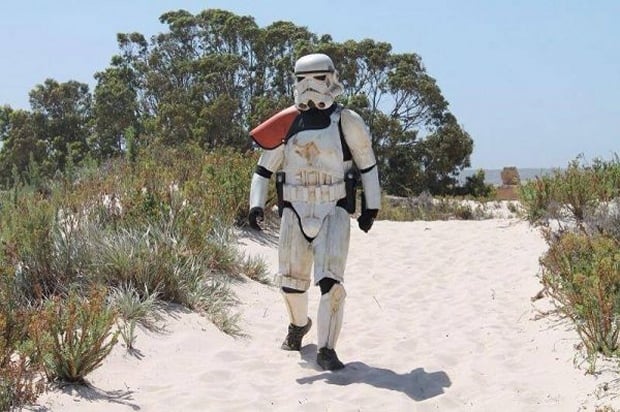 Scott Loxley is a member of the 501st Legion, a costuming organization operated by Imperial Stormtroopers, who are also highly charitable. You’ve probably heard of their legendary deeds across the internet. Well, Loxley plans to walk around the entire coast of Australia in Stormtrooper armor. That is nearly 10,000 miles. Why is he doing this? To raise money for a children’s hospital of course. Good on you, mate!

So far Loxley has traveled about 5,600 miles in a year and a half, and he still hasn’t found the droids he’s looking for. If all goes well he should finish the journey by July of next year. Now that is dedication to a worthy cause. So far he has raised about $19,000(USD) for Monash Children’s Hospital in Melbourne, which will open in 2016. He hopes to raise as much as $87,000 by the time he is done. Not bad for a single Stormtrooper. And he is working for the light side too.

If you’re interested in contributing to Scott’s fundraising campaign, hit this link to pledge your support.