Director Brad Bird has proven his chops in both animated films, having directed The Iron Giant, and The Incredibles, and also with blockbuster live-action with Mission Impossible: Ghost Protocol. Brad’s next film is a science fiction flick called Tomorrowland – and it appears to combine live-action and animation, judging from the freeze-frame I grabbed below:

The film’s screenplay was co-written by Bird and Lost co-creator Damon Lindelof. The story is described as a mystery adventure about a jaded, former boy-genius named Frank Walker (George Clooney), and a curious and optimistic teen named Casey Newton (Britt Robertson) who end up on a mission to discover the secrets of a mysterious place called “Tomorrowland.” Presumably, they’re not talking about the Disney World attraction, but with Disney behind the film, you never know. But I’m thinking that given where they took Pirates of the Caribbean, the connection to the theme park will be loose at best.

Casey finds herself in possession of a pin which opens a gateway to the mysterious place, “where nothing is impossible.” Apparently, visit to this place of wonder will change the destiny of the world. If that sounds vague, it is. And once you watch the teaser trailer, you won’t know anything more. That’s okay, that just means more trailers for later.

Perhaps what excites me most about the film is the rumored involvement of Syd Mead. Syd was visual futurist on films such as Blade Runner, Aliens, and TRON. This concept art posted up on Entertainment Weekly and credited to Mead should serve as proof that he is involved in the film – at least in some capacity: 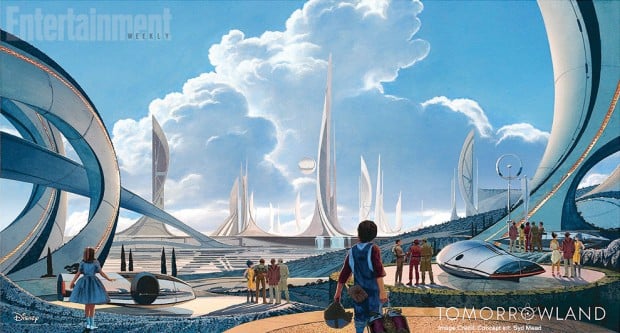