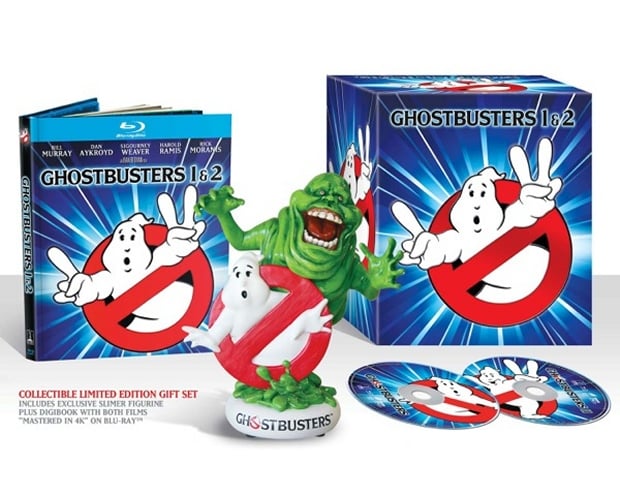 It is a good time to be a Ghostbusters fan, with the theatrical re-release hitting theaters on August 29 and now the Blu-ray Anniversary Editions of Ghostbusters and Ghostbusters II will be available on September 16 as well.

The two-disc anniversary edition Blu-ray includes both films, and there will be a limited edition gift set that includes an exclusive Slimer figurine and the two-disc Digibook. The special gift set will only be available for a limited time. You’ll be happy to know that both films have been fully restored and remastered in 4K and are HD. That slime is going to look incredible!

As far as bonus materials for both movies, you’ll get conversations with director Ivan Reitman and Dan Aykroyd, never-before-seen deleted scenes from Ghostbusters II and more. The Ghostbusters anniversary edition even has the original music video of the Ghostbusters song by Ray Parker Jr., while Ghostbusters II has the original music video for On Our Own by Bobby Brown. Let’s face it, no one cares about that song. Aside from that, Ghostbusters will feature all previously released legacy content, commentary and an interactive “Slimer Mode,” which is a picture-in-picture viewing experience, something we’re very curious about.