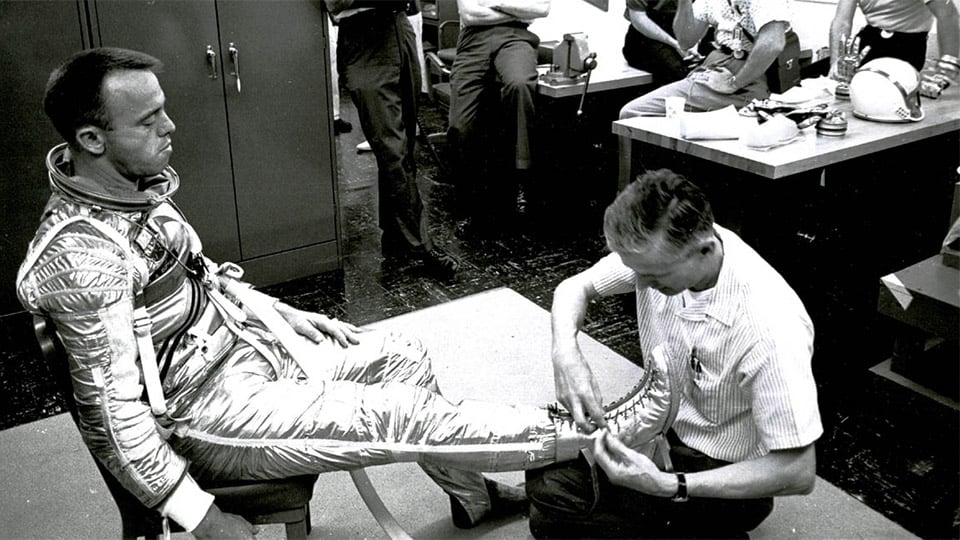 The first flight into space by an American was Alan Shepard’s Mercury-Redstone 3 mission (or MR-3) in May of 1961. Shepard’s flight lasted just over 15 minutes and the spacecraft traveled 302 miles from its launch point, ascending to 116.5 miles above Earth. The Atlantic dug up the flight surgeon’s report from the NASA archives and found some interesting tidbits from NASA’s pre-flight ritual with Shepard.

1. Shepard was isolated in the Crew Quarters of Cape Canaveral for three days prior to the flight.

2. He ate in a special feeding facility with a personal chef whose sole duty was to prepare his meals.

3. The diet was designed to be “tasty and palatable” and included orange juice, cream of wheat, and Canadian bacon.

4. For each meal, the chef prepared several identical meals so that they could be eaten by other people as part of an epidemiological study, if necessary. One was kept in a refrigerator for 24 hours in the event Shepard developed a gastrointestinal illness.

5. NASA encouraged Shepard to go to bed early each evening. He was in bed at 10:15 the night prior to the mission.

6. Shepard was found to have not dreamed during his sleep before the mission.

7. Gus Grissom, who piloted a later flight, was allowed to sleep 65 minutes later than Shepard because NASA changed the routine to have him shave and bathe the night before. We wonder if he laid out his jammies, too?

8. Shepard was permitted no coffee for 24 hours before the flight. Heresy!

9. Before getting suited up for the flight, astronauts wore bathrobes around the facility. Comfy!

10. The flight surgeon fawned over the astronauts a bit, noting the “calm reserved air of confidence which typifies both of these pilots.”

11. Each astronaut had their electrode attachment locations tattooed onto their bodies. An “amp stamp” perhaps?

12. The surgeon stayed near the capsule as Shepard was strapped in for the flight to get “some indication of the pilot’s emotional state at the last possible opportunity.”

13. Following the mission, in the debriefing facility, the astronauts were examined by a flight surgeon, a surgeon, an internist, an ophthalmologist, a neurologist, and a psychiatrist.

It’s amazing to consider what went into these early space programs and the true bravery of these pilots.