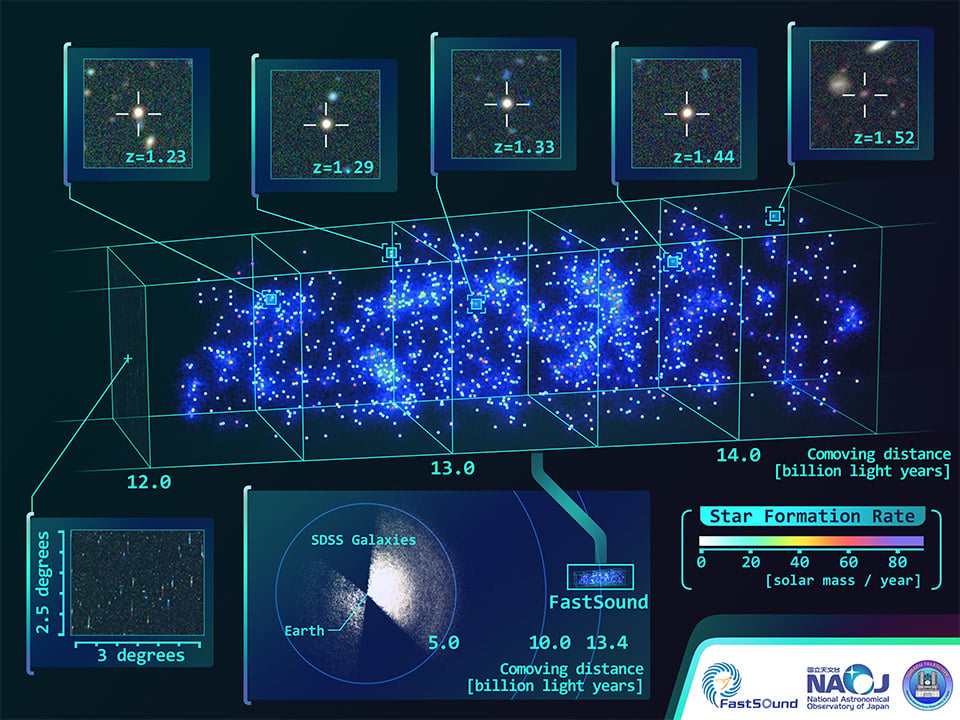 A new project from the FastSound project to map the universe in 3D as it looked 9 billion years ago, about 4.7 billion years after the Big Bang. One image of the map, shown above, shows an area “2.5 times 3 degrees of the sky, with a radial distance spanning 12-14.5 billion light years in comoving distance or 8-9.6 billion light years in light travel distance.” The gradation in background color represents the number density of galaxies; the underlying mass distribution (which is dominated by dark matter) would look like this if we could see it.

The first version of the 3D map from the project is shown in the video below. The team will eventually survey a region totaling about 30 square degrees in the sky and then measure precise distances to about 5,000 galaxies that are more than ten billion light years away.

The team describes their 3-D map shown in this release as using a measure of “comoving” distance rather than light travel distance. They explained: ”

Light travel distance refers to the time that has elapsed from the epoch of the observed distant galaxy to the present, multiplied by the speed of light. Since the speed of light is always constant for any observer, it describes the distance of the path that a photon has traveled. However, the expansion of the Universe increases the length of the path that the photon traveled in the past. Comoving distance, the geometrical distance in the current Universe, takes this effect into account. Therefore, comoving distance is always larger than the corresponding light travel distance.”