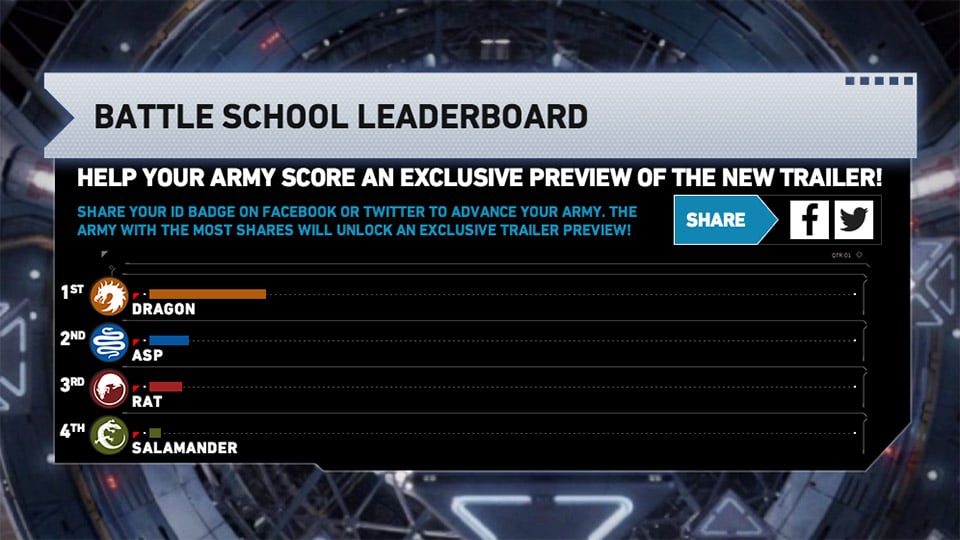 The viral site for the upcoming Lion’s Gate film, Ender’s Game, has just launched the first battle for those who joined the International Fleet via the Recruitment Center. Between now and 9 AM PST on Monday, the army that shares its army badge on Facebook or Twitter the greatest number of times during that window will win an exclusive preview peak at the final trailer. The screenshot above shows the current results as of 1:00 PM PST on August 2.

Be sure to return to the site after the end of the battle to check the results.

The film Ender’s Game is based on the highly regarded Orson Scott Card novel of the same name and hits theaters on November 1. Scott Card’s novel won the 1985 Nebula Award for best novel and the 1986 Hugo Award for best novel. The story centers around Andrew “Ender” Wiggin (Asa Butterfield), who is recruited by the International Fleet at the age of six because of his promise in the early monitoring done by the IF. Ender begins his training at Battle School immediately after he’s recruited and his exceptional promise becomes apparent.