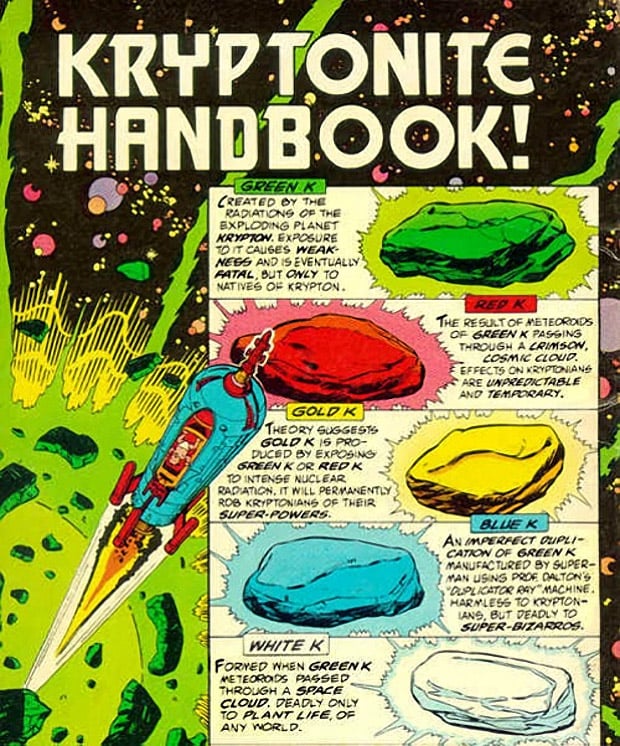 The Atlantic’s Paul Fairchild explains the bad idea that is kryptonite. Beginning with the necessary introduction of a vulnerability (“Invincible characters are boring”), Fairchild explains why kryptonite was introduced to the world of Superman and why it was a “spectacularly bad, poorly thought out plot device.”

The first few Superman stories were not very compelling — just the toughest guy on Earth delivering a beat-down to completely average bad guys. And, after a few issues of mundane crime-fighting, creators Joe Shuster and Jerry Siegel realized Superman was too effective. Much like Homer’s introduction of Achilles’ heel in The Odyssey, after Achilles was invulnerable in The Iliad, the Superman writers packed on novelty after novelty to keep the invulnerable superhero interesting.

It was the writers involved with the creation of radio show, The Adventures of Superman, who felt pressure to crank out three episodes a week and brought forth the green rock known as kryptonite, which made Superman vulnerable. And kryptonite was soon embraced by their comic book writing brethren. Eventually, the writers came up with a counterbalance to kryptonite: lead renders it harmless. After that, the writers came up with better kryptonite in a rainbow of colors: red, gold, blue, and white, each with its own unusual effect.

This leads Fairchild to point out that kryptonite is nothing but a metaphor for weaknesses we all have. He’s glad to see that Zack Snyder avoided the use of kryptonite in Man of Steel, instead opting for two better, time-honored solutions: he lays down better backstory, and he introduces better villains.